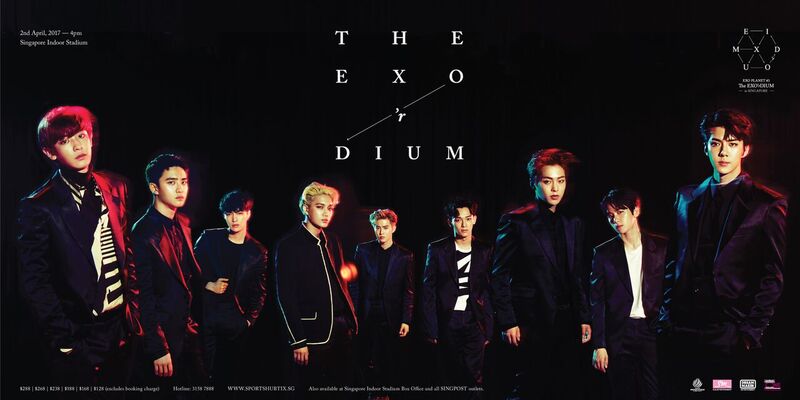 Global star EXO to stage their third Concert Tour “ EXO PLANET #3 – The EXOrDIUM – in SINGAPORE” on 2nd April, 4pm at Singapore Indoor Stadium! This tour marks the group’s third solo concert tour since their debut in 2012. EXO has set a new record to be the first K-pop group in history to hold six sold-out concerts at the Seoul Olympic Gymnastics Arena, amassing over 84,000 spectators.

EXO debuted in 2012 and rose to fame with its first original album [XOXO] shattering records by becoming the first album in Korean music industry to sell over one million copies in twelve years. EXOs third original album EX-Act was recently awarded Mnet Asian Music Award 2016 – Best Album of the Year and is also their third consecutive album to have sold over 1 million copies setting a triple million seller record, proving their selling power as a global star. EXO set and break records internationally earning them a position as the most influential celebrity by Forbes Korea.

“EXO PLANET #3 – The EXOrDIUM” kicked off its first show in Seoul and has since toured in many cities including Bangkok, Fukuoka, Sapporo, Tokyo, Osaka, Hang Zhou and Taipei. In this close to three-hour show, EXO is set to perform hit titles like Growl, Wolf and Overdose as well as LOTTO& Monster from their latest album. The EXOrDIUM will be one of the biggest concert of the year with an extraordinary production including spectacular stage with fantastic lightings and visual effects. This concert is definitely one not to be missed in 2017!

For more information about EXO PLANET #3 – The EXO’rDIUM – in SINGAPORE, visit ONE Production’s Facebook.