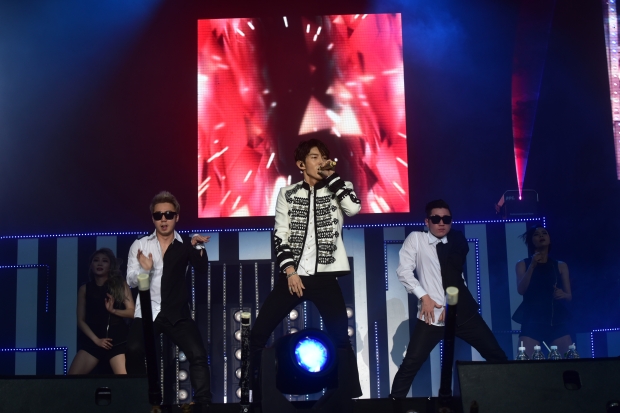 On 4th March 2017, the charming South Korean Actor-Singer and Model Lee JoonGi was in town for his Asia Tour “ThankYou” at the HSBC Woman’s Champions Music Festival held at Sentosa Golf Club.
The concert started off with him performing to “Lost Frame”. After a couple of songs, he greeted and interacted with the fans, and also showing them how they can enjoy his show!

As it was his first time in Singapore, JoonGi assured his fans that he will put his everything into the performance and showcase to his fans as he felt apologetic to those who have waited a long for him in Singapore.

Lee JoonGi performed a few of his hit songs such as “Ma Lady”, ballad songs “Compliment Me” and “For A While”. Not only that, Lee JoonGi also performed to Jason Mraz’s “I’m Yours” and “Geek In The Pink” and May Day 五月天’s “知足”.

From his recently released album, he sang passionately to the song “ThankYou” and “Now” as an appreciation to his fans. As this stop for his Asia Tour is held in Singapore, he prepared “Our Singapore” by JJ Lin as a special performance.

During the encore stage, Lee JoonGi performed to the drama Scarlet’s Heart Ryeo’s OST “For You”  and showcased his performance to his fans by performing to “Sexy back”, “Bring Da Beat” and rocked the stage with BIGBANG’s song “Fantastic Baby” and “Good Boy”!
For his passionate fans, Lee JoonGi also danced to the popular girl group Twice’s “TT”!

Ending his stage, he thanked the Organisers for inviting him to Singapore and for making this fan meet possible and a wonderful one. He would also like to thank fans all over the world for coming to Singapore to see him.
The final last song for that night was “Together”.

Lee JoonGi also mentioned that his encore concert will be held in Korea and also said that fans who can’t get enough of seeing him should go! Lee JoonGi’s “ThankYou” encore concert will be held on 15th April Saturday at Seoul Olympic Park Olympic hall.
Before the concert came to a close, he invited his dancers, who were with him for 8 years to the stage and did a bow to thanks his fans.